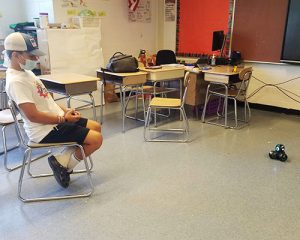 Rising seventh-grader Cole from Watervliet arrived early on the last day of STEM Summer Camp to have some extra time tinkering with a Cue Robot to prepare for the day’s Olympic-themed Robotics Showcase.

“I like programming,” said Cole, using an app on his phone to race the robot around the classroom floor. “I’m excited to demonstrate the autonomous programming we did with the Cue Robots where they navigate their way through a maze.”

Bella, who will be in eighth grade in September, was among the first to arrive at the camp’s Lego Robotics classroom. 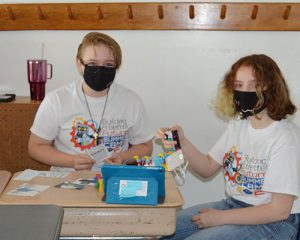 She admitted that at first she wasn’t sure what to expect with the STEM camp. “I was hesitant, but then we started working hands on with the Legos and robots,” Bella said. “I made a breakdancing robot with Legos, which was a challenge, but after a few adjustments it worked well.”

Anthony, who will soon enter grade 7, said his favorite part of camp was building with Legos. “It was fun to work with the motors and sensors and program the small robots to move automatically.”

The weeklong STEM camp offered 24 students from the Watervliet and Lansingburgh school districts, a hands-on learning experience designing, building and programming with Lego Robotics kits and Cue Robots. Students worked in pairs or small teams, which allowed them to build collaboration and problem-solving skills. The camp also provided an opportunity to make new friends, as together students explored the world of robotics and practiced their coding skills. 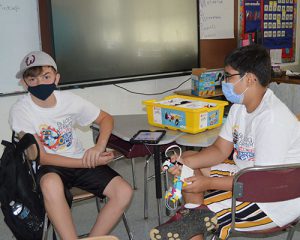 Hillary Northrup and Katrinka Scarff, Ballston Spa Middle School teachers with strong backgrounds in science, served as the STEM Camp instructors. A week prior to the start of camp, the two educators teamed up with a certified Lego trainer to learn all about the Lego Robotics program.

“The camp has been fantastic,” said Ms. Scarff. “So many of the students have had some experience with coding or building, which let us jump ahead. The level of interest among the students was amazing; they really just dove right in.”

College student Christopher Snyder, from Rensselaer Polytechnic Institute (RPI), provided technical support in the classroom and was a great resource for the students and the educators alike.

The Summer STEM Camp was presented by the Capital Region BOCES in partnership with Questar III.