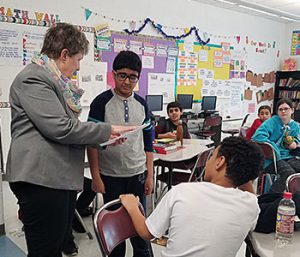 Congratulations to Rayan Ahmed, a student in Brittney Garhartt’s sixth-grade class, whose essay stood out among the hundreds of entries submitted to the Watervliet Elks by students from Green Island, Menands and Watervliet.

The annual contest, sponsored by the Elks nationwide, is intended to help students develop their writing skills, as well as provides an opportunity for students to express their thoughts on patriotic subjects. 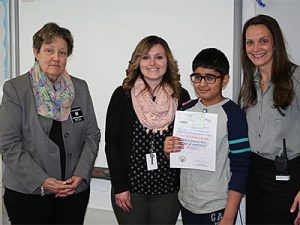 This year, students were asked to write essays based on theme, “What Makes You Proud of America.” In his essay, Rayan expressed his pride for America because our freedom and independence, and mostly because of the rights that all citizens are granted under the U.S. Constitution and in the Bill of Rights.

All students who wrote an essay for the contest received a certificate and a special treat for participating.

Rayan’s winning essay will move up to the district level competition next, and if selected at that point, will advance to the state, and potentially, the national levels.